Ange Degheest (1928-2009) studied engraving at the School of Fine Arts in Rennes. In the early 1950s, she was hired by the Fonderie Typographique Française (FTF) in Paris as the assistant of renowned type designer Enric Crous-Vidal. In 1960, after having briefly worked in Switzerland, she went back to Brittany in order to teach engraving and graphic arts, a position she would hold for the next 18 years. Degheest’s story is remarkable, yet it is astonishing and disturbing that her name has been forgotten amongst the list of those who have shaped the history of typography to this day.

Alice Savoie is an independent type designer and researcher based in France. She holds an MA and a PhD from the University of Reading. Her recent type design work includes Faune, an award-winning typeface commissioned by the French Ministry of Culture, Romain 20 (205TF) and Lucette (Future Fonts). She was the lead post-doctoral researcher on the ‘Women in Type’ research project. She teaches at ANRT Nancy (France) and Écal Lausanne (Switzerland).

Philippe Tytgat (1980) is an independent French graphic & motion designer living in Nancy. He has studied at École nationale supérieure d'art et de design Nancy, where he is currently teaching. He works mainly in cultural and musical sectors, creating visual identities and animations.

You can order as guest or create an account where you can store your adress and review your orders & invoices.
We feel deeply concerned about the tragedy in the Ukraine. For each item in your cart we donate 1€ to Ukrainian refugees in Frankfurt.

The poster presents full glyph sets of typefaces which are characterized by a tension between gothic and roman forms, in the transitory period of 1459-1482 when the first humanistic letterforms were translated into type, and, 400 years later, when some of these atypical types were revived by Private Presses in England and Germany before they went once more largely forgotten.

Based on collective workshops between 2015 and 2019 in eleven design schools and libraries in France, Germany and Italy, Alexis Faudot and Rafael Ribas collected the sources of fifteen typefaces and revived them digitally. The poster was released at the occasion of the “Gotico-Antiqua, Proto-Roman, Hybrid. 15th century typefaces between gothic and roman” exhibition and symposium in Nancy 2019 at Atelier National de Recherche Typographique, which hosted also the research programme.

The poster is part of the collection of Letterform Archive, San Francisco, Klingspor Museum, Offenbach am Main, Gutenberg Museum Mainz and Bibliothèque nationale de France, Paris. The typefaces were released as Open Source fonts (find the download link below).

Buy the poster and the Gotico-Antiqua book together and save 10€. 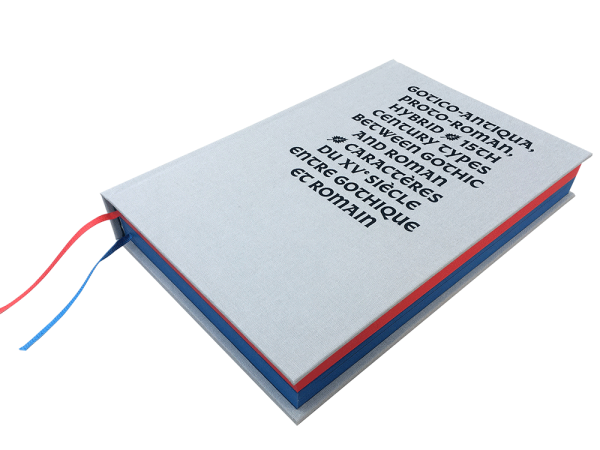 Back
Top
buy
X
Choose your edition ?
No edition selected yet
Add to cart Checkout
Buy Poster for 80 €